Step up to save our planet! 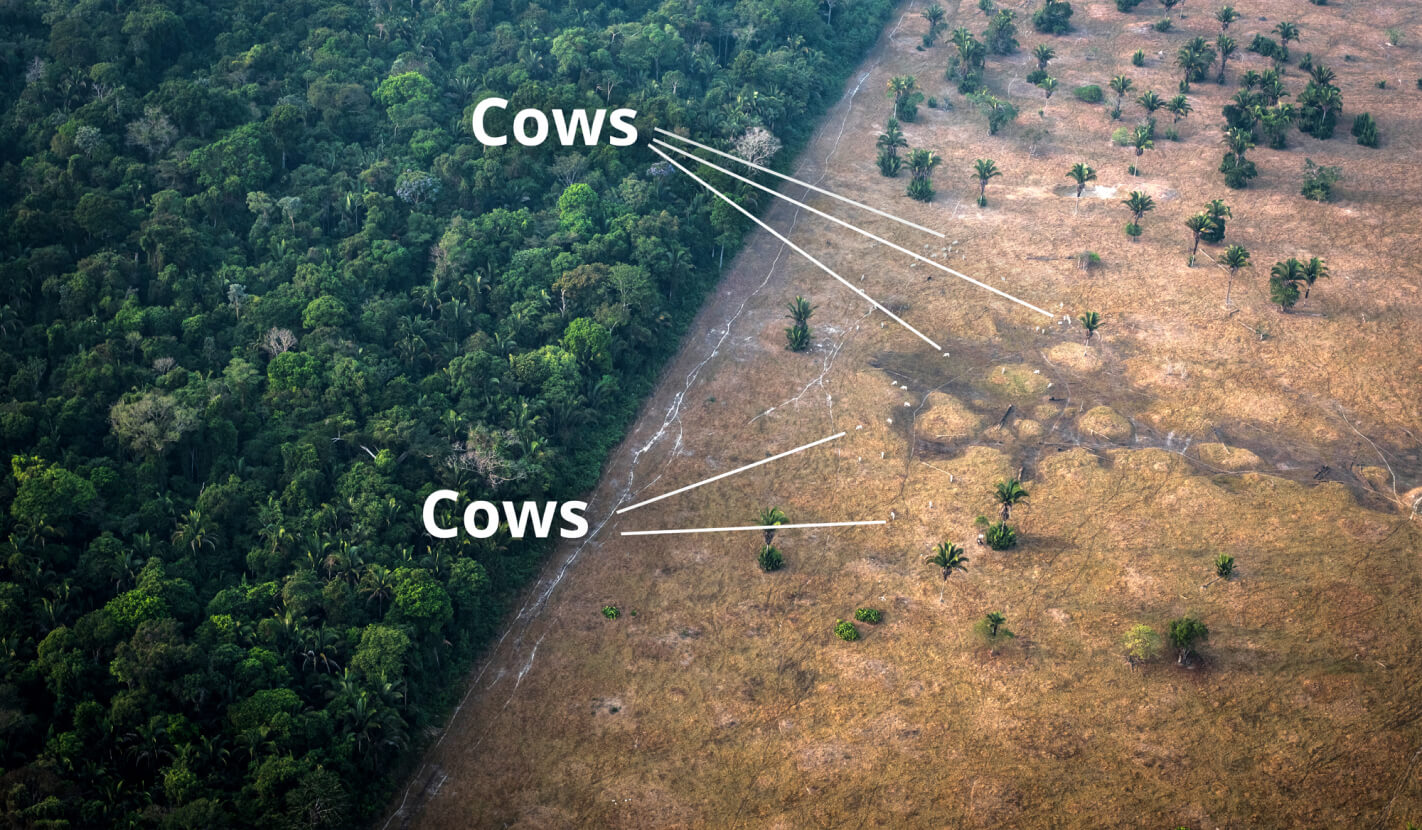 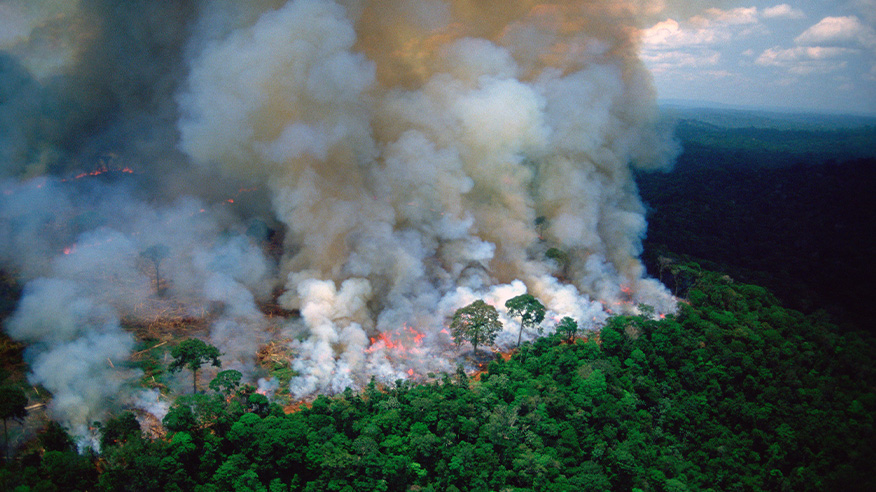 Clearing land for cattle grazing is one of the leading drivers of deforestation globally — including in Brazil's Para state, where hundreds of fires in 2019 obliterated native ecosystems to make way for pasture and feed crops.

Cows, not fossil fuels, are the most destructive technology on earth. 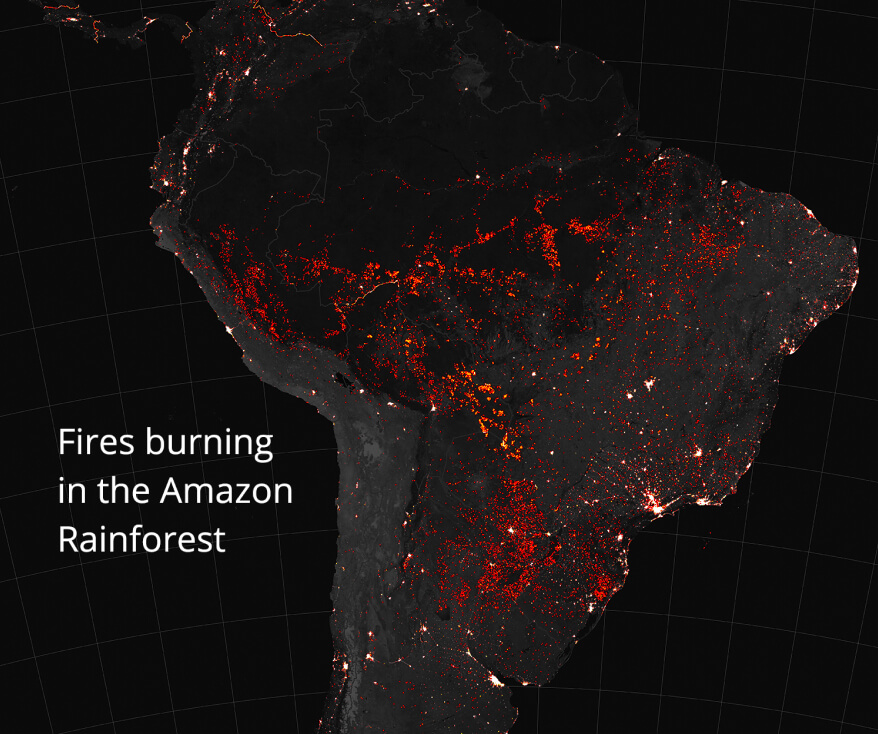 The destruction of native ecosystems is driving a catastrophic loss of biodiversity. 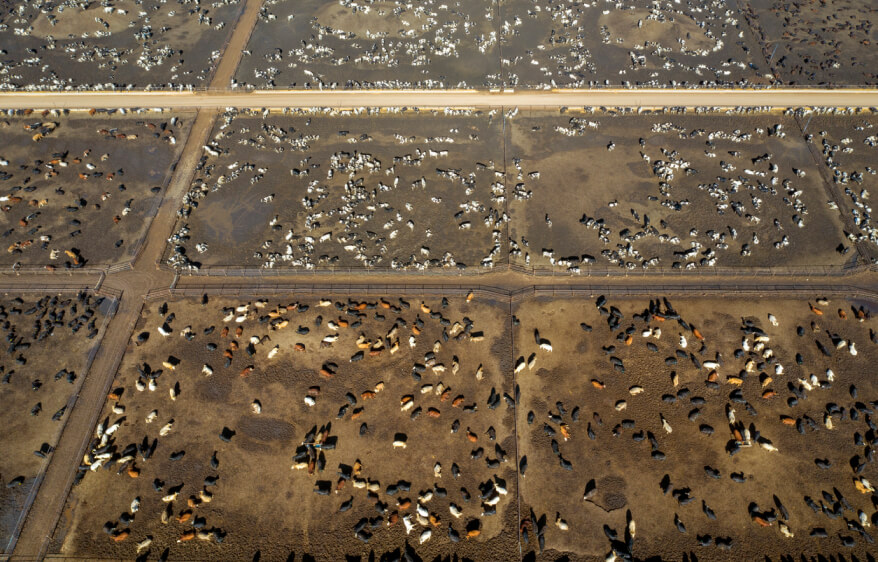 The destruction of native ecosystems is driving a catastrophic loss of biodiversity.
If we eliminated animal agriculture today, atmospheric greenhouse gas levels would DECLINE over the next few decades.

Cows, not fossil fuels, are the most destructive technology on earth.

The use of animals to transform plants into meat is by far the most destructive technology on Earth. 45% of the planet’s land area has been converted to pasture or farmland to feed livestock, releasing almost a trillion tons of carbon dioxide into the atmosphere -- the equivalent of 20 years of global emissions. And annual release of carbon dioxide, methane and nitrous oxide associated with animal agriculture has a bigger impact on global warming than the burning of fossil fuels for transportation.

The use of animals as food technology is also the primary driver of a catastrophic global collapse of biodiversity – a loss of more than two-thirds of global wildlife populations in the past 50 years. The world’s population of 1.7 billion cattle outweighs every wild mammal, bird, reptile and amphibian left on Earth, combined, by more than a factor of 10. And rising demand for meat drives 80% of the ongoing destruction of the Amazon, whose fragile ecosystem is nearing a tipping point for collapse.

If we eliminated animal agriculture today, atmospheric greenhouse gas levels would DECLINE over the next few decades.

But we can play this disaster movie in reverse. By replacing animals as our technology for making meat, we can turn back the clock on global warming and restore native ecosystems. The recovery of biomass on land currently devoted to livestock would remove enough CO2 from the atmosphere to offset 20 years of emissions at current levels, and once livestock methane emissions stop, rapid decay of atmospheric methane would effectively negate another 10 years of total GHG emissions at current rates.

That’s 30 critical years to hold off the worst effects of climate change and give science and society time to phase in alternatives to fossil fuels in energy production and transportation.

How is animal agriculture

The use of animals as a technology for transforming plants into meat and milk and fish is by far the greatest threat to our future that humanity has ever faced.

Founder and CEO at Impossible™

As much as some might hope to regulate livestock out of existence, or persuade people to give up foods they love for the good of the planet, neither is realistic. Viewed as a behavioral or policy problem, it looks hopeless -- but this is fundamentally a technology problem, and a solvable one.

This is a job for science. 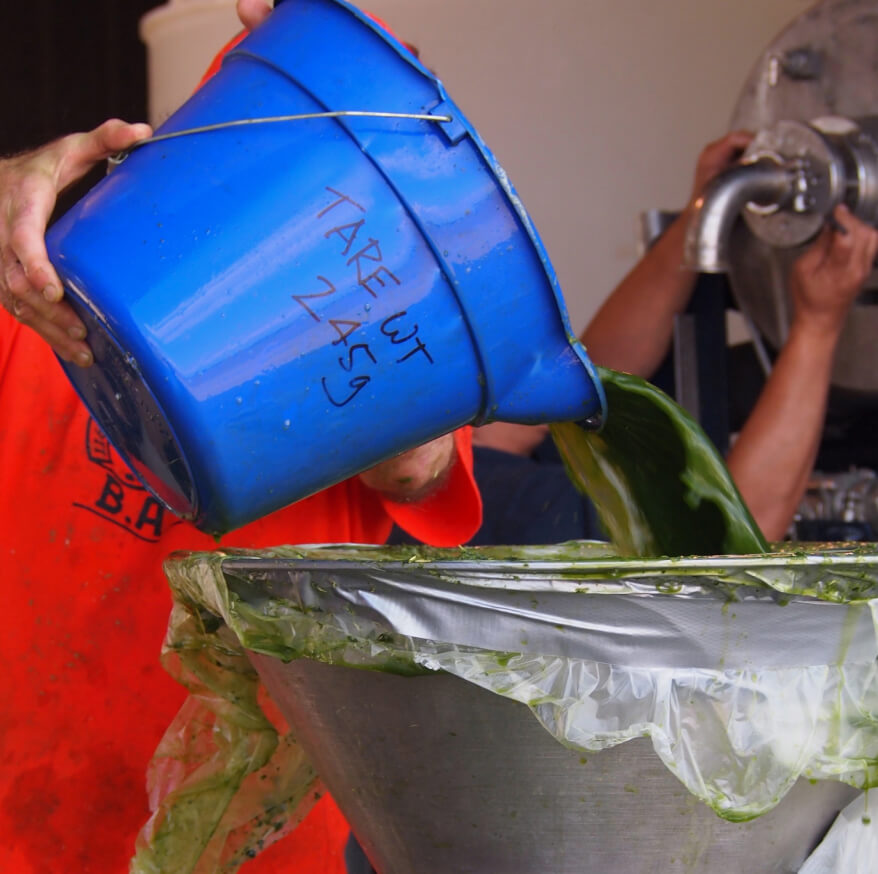 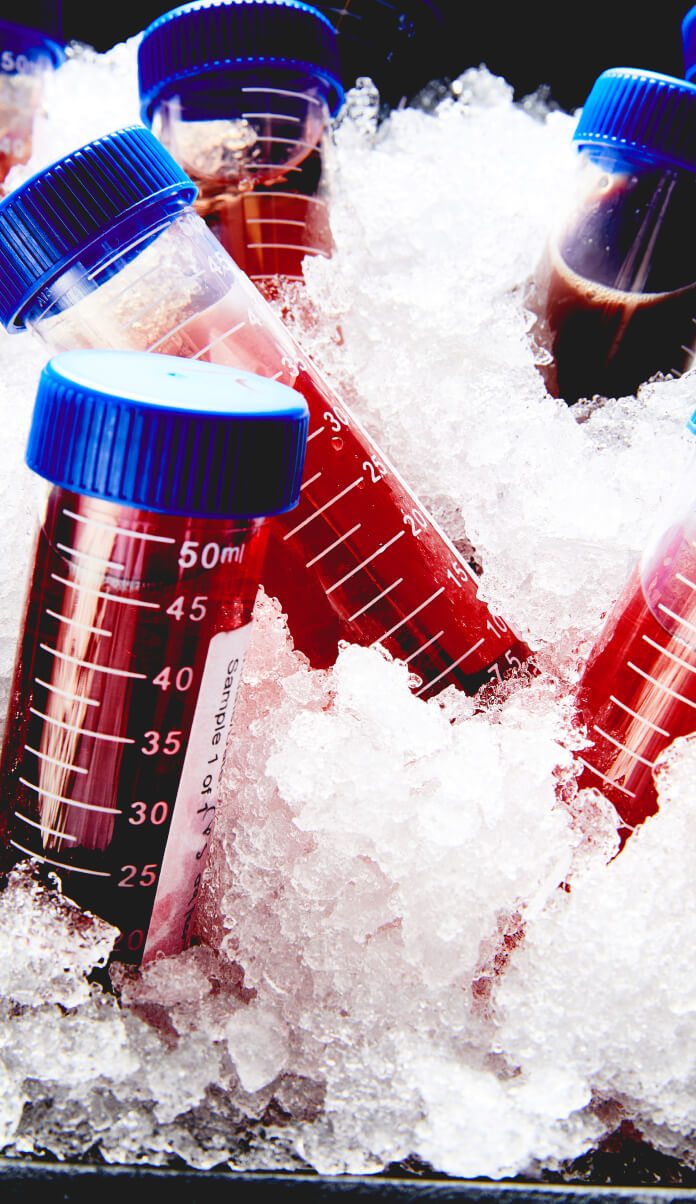 Since 2011, Impossible scientists have been exploring and developing novel proteins for the future of food, including Rubisco from alfalfa (above) and soy leghemoglobin (left).

Cows did not evolve to produce meat, and they’re terrible at it. But with modern science we can decipher the essential biochemistry that underlies the deliciousness of meat, recapitulate it with sustainable ingredients from plants, and create meat that is more delicious, healthierand more affordable than today’s obsolescent animal-derived products.

By inventing a categorically better technology platform without the destructive impact of animal agriculture, creating better products and letting consumers choose, science can save our planet.

Since 2011, Impossible scientists have been exploring and developing novel proteins for the future of food, including Rubisco from alfalfa (above) and soy leghemoglobin (left). 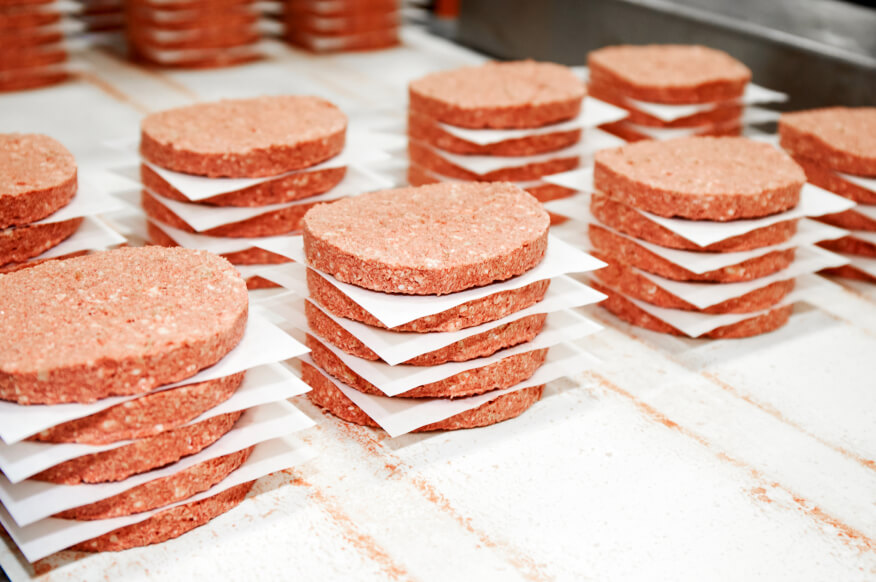 The groundbreaking Impossible Burger tastes, cooks and sizzles like ground beef from cows — without any animal ingredients whatsoever.

This isn’t a fantasy. Our scientists have already discovered how to make ground beef from plants that rivals ground beef from cows. Chefs love the Impossible Burger, and omnivores are increasingly choosing it over the traditional cow product in restaurants and grocery stores. 72 percent of purchases come directly at the expense of animal-derived meat, and a large majority of meat-loving consumers who try it once buy it repeatedly.

The groundbreaking Impossible Burger tastes, cooks and sizzles like ground beef from cows — without any animal ingredients whatsoever.

This success shows that, while people love the taste, versatility and center-of-plate heartiness of meat, they do not love that their favorite food is the corpse of a slaughtered animal. Meat lovers -- even beef-loving Texas ranchers, are ready for today’s animal-based technology to be replaced -- if they don’t have to compromise on taste. We now know that when people have the choice of an animal-free food that is equally delicious and satisfying, the vast majority of people pick the plant-based product.

THIS IS NOT A JOB FOR POLITICIANS ANYMORE. THIS IS A JOB FOR SCIENCE.

THIS IS NOT A JOB FOR POLITICIANS ANYMORE. THIS IS A JOB FOR SCIENCE.

The fate of our planet hangs in the balance, and the clock is ticking…

Impossible has made great progress, but we’re just getting started. Most of the great scientific and engineering opportunities and challenges are still waiting for you. 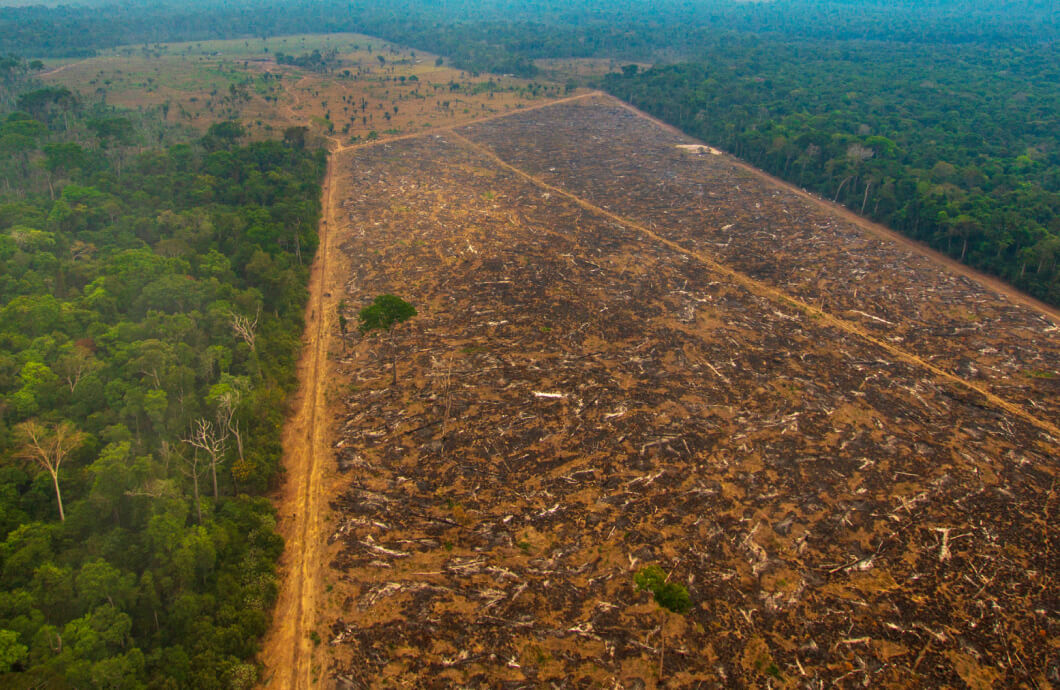 How do we build a complete technology platform that enables all the foods that humanity currently gets from animals to be made directly from plants? How do we transform plant proteins into uncompromisingly delicious steak, fish fillets, bacon and shrimp? What about milk, cheese, eggs and more? How do we create the diverse and dynamic textures, flavors and aromas in all of these diverse products? How do we reinvent agriculture for a world in which crops are no longer used to feed livestock but instead provide the essential ingredients for meat and dairy foods? Do we use existing crops? Do we introduce new ones? Can we use leaves as a major source of dietary protein for humans? How do we scale our technology affordably and sustainably for global food security? And as we succeed, how do we create new livelihoods for farmers and ranchers in repurposing land previously dedicated to animal agriculture into thriving, biodiverse ecosystems that capture carbon as biomass? 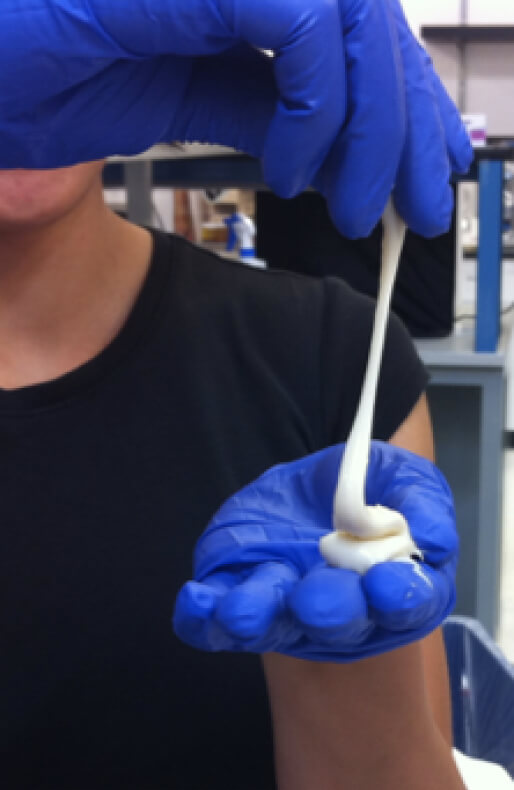 Impossible scientists are developing a diverse array of innovative materials from plant-derived proteins to cover the spectrum of food textures and mechanical properties.
Above left: Testing a protein fiber prototype for next-generation “whole cut” products.
Above right: Mozzarella prototype, 2012.

You never dreamed of working on the food system. You didn’t know that inventing a new technology platform to replace animals in the global food system is our best, and perhaps only, chance to save our planet from environmental catastrophe. Or that it’s a huge, multifaceted scientific and engineering challenge worthy of the most innovative scientific and engineering minds on Earth.

The question is, now that you know, what are you going to do?

Do you stay on the conventional path, working on your little piece of the vast puzzle and waiting for someone else to save us? Or do you seize this moment to save our planet for future generations.

To enable mission-driven scientific pioneers and innovators to join forces in tackling the greatest scientific challenge of our time, Impossible is holding an open competition for the first generation of “Impossible Investigators”. This alternative to a conventional academic faculty offers a unique opportunity for scientists at all career stages to maximize their impact, in an innovative, collaborative environment with outstanding facilities, resources, funding and colleagues.

We’ve raised nearly a billion dollars to develop technology for a global plant-based food system. Your challenge is to tell us how you would spend it. Send a CV and a brief statement describing how you and your team can contribute to replacing the most destructive technology in human history, turning back the clock on climate change and changing the way Earth looks from space.

Want to see the full list of our job openings?