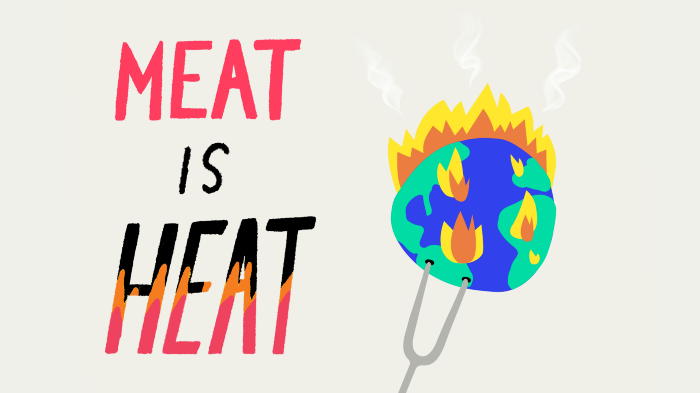 I’m writing from the COP25 conference in Madrid. The climate goals being discussed here by national leaders, like those set four years ago in the Paris Climate Agreement, while important, are entirely inadequate, representing a resigned acquiescence to the inevitability of disastrous climate change. And governments are failing to take the decisive steps required to meet even the far-too-feeble commitments in that accord.

The planet our children will inherit requires far more ambitious goals and strategies that don’t depend on international consensus or political courage. Our goal should be to turn back the clock on climate change. And we can do it.

There’s a broad scientific consensus that a global shift to a plant-based diet would not only significantly reduce ongoing GHG emissions but actually provides a realistic route to turning back the clock on atmospheric greenhouse gases.

Animal agriculture is the most destructive technology on the planet and is a major contributor to global greenhouse gas emissions, contributing four times more than Exxon, Shell, BP and Chevron combined. Eliminating animal agriculture globally would be the greenhouse-gas equivalent of eliminating every car, truck, bus, ship, airplane, and rocketship combined. But there’s an even bigger opportunity.

The land footprint is the problem (and the opportunity).

All the cities, buildings, roads and paved surfaces in the world occupy less than 1% of Earth’s land surface. The overwhelming majority of humanity’s footprint on our planet, covering more than 45% of the land surface of Earth, is the land devoted to grazing or growing feed crops for livestock, whose relentless expansion is visible in the daily fires and rapid deforestation of the Amazon. The vast land area currently used to graze or grow feed crops for livestock supports far less plant biomass than the intact healthy ecosystems that preceded the introduction of livestock — compare the Amazon rainforest to the cattle farms and soybean fields that are replacing it. In fact, the historical loss of biomass from the land currently devoted to livestock is the carbon equivalent of about 15 years of fossil fuel emissions.

Recovery of the plant biomass and the biodiverse ecosystems that were degraded or destroyed on the way to today’s land footprint of animal agriculture offers our best immediate opportunity to turn back the clock on climate change. Equally important to the future of our planet, this recovery would simultaneously reverse the catastrophic collapse of global biodiversity.

And the only technology required is photosynthesis, the 3-billion-year-old process by which plants use energy from the sun to turn atmospheric CO2 into plant biomass. It’s the best, cheapest, most scalable carbon capture technology on Earth — vastly simpler, more efficient and more affordable than controversial geoengineering projects, which would require unprecedented international cooperation and risk unfathomable unintended consequences.

But it can’t happen while the global animal agriculture industry continues to occupy this land, supported and incentivized by the growing global appetite for meat. As long as we depend on animals to satisfy the world’s demand for meat, the land footprint will only grow, as vividly evident from the fires eating away at the Amazon forest.

We can do this.

So why isn’t the world seizing this opportunity and switching to a plant-based diet? Nutrition isn’t the reason; there’s far more than enough farmland to feed the world today with zero dependence on livestock. The global soybean crop alone contains 60% more high-quality protein than is in all the meat consumed globally, but it occupies only 0.8% of Earth’s land surface. All the fruits and vegetables humans consume are grown on less than 0.7% of Earth’s land surface. And decades of scientific studies have shown that no animal products are required for optimal health at any stage of life.

The simple answer is that billions of people around the world love the foods we’ve traditionally produced using animals. The distinctive sensory pleasures they derive from meat (and fish and dairy foods) are an essential source of happiness and comfort in their daily lives. It’s no wonder that every effort to persuade people to reduce or eliminate meat from their diets has failed. They will never trade their beloved burgers and steaks for veggie burgers and tofu. That’s where Impossible Foods comes in.

Impossible Foods believes that the way to unlock this solution to the greatest environmental crisis humanity has faced is not to ask consumers to change their food choices, but to invent a better way to produce the meat consumers love and to outperform the animal agriculture industry in delivering pleasure and value to consumers around the world. Then let the subversive power of the market take care of the rest.

Our mission is to completely replace the use of animals as a food technology within 15 years. We have a long way to go, but we’re well on our way. It won’t be the first time that a ubiquitous, ancient technology has been sweepingly replaced by an upstart that just does a better job of serving consumers. Our scientific research into the fundamental mechanisms underlying meat flavor and texture, and our success in the marketplace, have clearly shown that it is possible to make delicious meat that satisfies uncompromising meat lovers, directly from plants. And unlike the prehistoric, massively inefficient and fundamentally unimprovable technology we use to produce meat today, our plant-based approach and the products we can make are getting better every day.

More than 3 million young activists have taken to the streets this year to demand accountability and solutions to climate change — the biggest threat to their future. We can’t settle for the feeble goals of the Paris Agreement or count on governments to achieve them. We have a moral obligation to the children of the world and to future generations to turn back the clock on climate change and reverse the collapse of global biodiversity. Independent initiatives like Impossible Foods can, and must, accomplish what governments and international organizations can’t. We can’t do it alone, but together #Wecandothis!